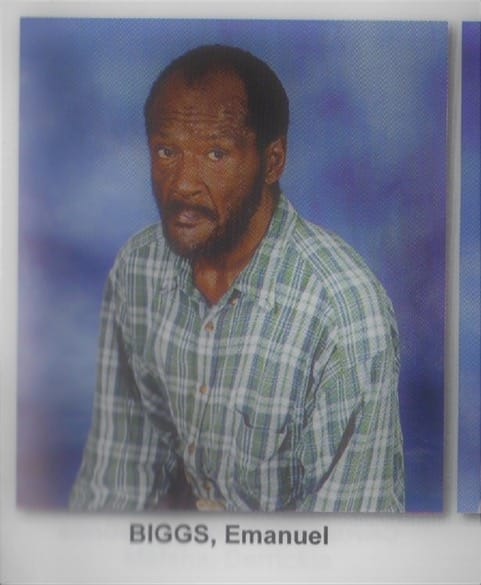 By Paul Bolster and Henry Bryant

I first met Emanuel on a Christmas Eve when my daughter Kristina was home from college. It was dark when he came banging on the door looking for a gift. I was not kind in asking him to leave my porch and when I returned to the cheerful living room, my daughter, who’d been listening, had tears on her cheeks. To make amends and save my daughter from an awful memory, I went to the kitchen, made a sandwich, and drove up Moreland and found Emanuel walking north on a cold wintery night. That was the beginning of a long and sometimes torturous relationship.

At 1:00am on Monday, October 24, my homeless friend, Emanuel Biggs, tried to cross Moreland from his favorite haunt, the Krystal, was struck by a vehicle, and killed. Emanuel was a chronically homeless person who frequented our neighborhoods for at least three decades. Occasionally he was housed, but of late he spent most nights in an outside stairwell at New Iconium Baptist Church. He lived life on his own terms and rejected most efforts to change his living conditions. Emanuel received significant health care from Grady Hospital, and from time to time their outreach workers tried to help him to a better life. Neither he nor the workers carried out the plan for very long.

At the time, I headed Saint Joseph’s Mercy Care Services, which provided health care to persons who were homeless.  I believed Emanuel could be the poster man for how society could provide a quality life for chronically homeless persons. Our outreach worker, Tony Stone, secured his Social Security money from people who preyed on him. Mercy Care workers visited Emanuel at Grady when he was beaten by a 2×4 and robbed of the money he flashed on the street. They made housing referrals and secured a room at O’Hearn House, a low barrier permanent housing project. That placement only lasted a year and a half. He broke the rules. No matter what we, Grady, or others did, we could not turn him into our success story.

I saw him once in front of a judge for the Atlanta Community Court. He was a regular at this treatment court and spent lots of nights in the City Jail. He didn’t like it there but it was somewhat of a vacation from the harsh realities of the street. On this occasion, as he was leaving the judge’s chamber he turned and asked the judge if the judge would speak to the jail staff so Emanuel could get his regular cell.

Courageously, East Atlantan Henry Bryant became Emanuel’s Social Security payee. For the past five years, on a daily basis, Henry has used those monies to keep him clothed and fed.

Despite his irritating behavior and ill manners, I will miss the hard realities of life he brought to my door. He made me see beyond the margins of my own comfortable life. And there was delight in seeing him walk in the middle of Woodland Avenue preaching to some unknown party he thought had wronged him — the President of the United States. One time I stopped him and asked why he was walking in the middle of the road. He looked puzzled at first, then with a somewhat charming grin he said “Well, I don’t have a car.” He laughed at his joke and after a moment, I laughed too.

Right to the end of his life, Emanuel made his own choices. But the opportunity for treatment of his mental illness, his addiction, and his cognitive limitations should have been more comprehensive. There should have been low-barrier housing in the neighborhood that met his expectations.

He first started out on my porch seeking work, but only $5 worth, after which he would stop, sometimes in the middle of the job. Later, I knew that he had been getting SSI. When he came begging one cold day, I asked him what happened to his SSI, and he said that he lost it when they carried him to jail. It was also terminated when he was in the hospital, and when he was kicked out of O’Hearn. So, I said he could use my address, not knowing what I had agreed to. Even that listing was not easy. It took three months for approval. A payee must keep meticulous records, especially if you don’t want to be accused of stealing the money. When he was sick, I took him to the hospital and even spent a couple nights at Grady with him since the staff could not understand his garbled speech. Having no teeth makes it hard to be understood.

His given name had meaning: he was born on Christmas Eve. He would have qualified for Medicare this Christmas, but he looked 10 years older than 65. His favorite songs were “Que Será Será” – what will be, will be – and “O Come All Ye Faithful,” which he sang, often at different times of the year, at the top of his lungs from the rocking chair on my front porch. Some in the neighborhood knew him as Hercules. He was not large but he was strong, and in his own way, quite brave. His last moments on earth were going against the light and the traffic trying to get across, much as he had lived his life.