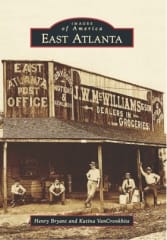 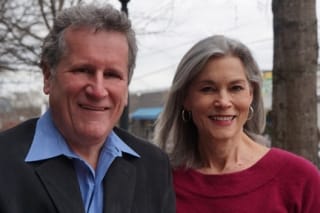 Henry Bryant and Katina VanCronkhite will launch their new book, “Images of America: East Atlanta,” on Friday, March 7 from 5:30pm to 7:00pm at the Argosy at 470 Flat Shoals Avenue in the East Atlanta Village. The book features more than 200 vintage images contributed by more than sixty individuals, organizations, and historical archives, collected over 30 years in the neighborhood and after a year of research. Many of the images included in the 128-page book have been rarely seen, and their stories reveal the area’s rich heritage that is little known today.
“We were fortunate that we were able to interview so many current or former East Atlanta residents who lived here as far back as the 1920s and 30s and whose ancestors settled the area before the Civil War,” VanCronkhite said. A relative newcomer to the area, she was eager to trace its history through the decades, from a crossroads of ancient Indian trails, to a bloody battlefield, to a prosperous Atlanta community. In the process, she even uncovered a photo of her street from the late 1800s and one of her own home taken before World War II.
Co-author Henry Bryant, after decades of activism in the community, became known as an East Atlanta historian. In 1980 he moved into one of the first homes built in McPherson Park, East Atlanta’s first subdivision that began along the Metropolitan Street Railway in the late 1880s. Some of his elderly neighbors had lived there for decades and shared stories and photos with him. Bryant became one of the visionaries for the revitalization of East Atlanta and helped begin the East Atlanta Community Association. He began documenting the decline and rise of the area in the 1980s with photos, several of which are included in the book.
Bryant and VanCronkhite had a few historical surprises along the way. Research at the Dekalb History Center uncovered the existence of a paper mill on Sugar Creek built at the time of critical paper shortage during the Civil War. The description of its location in miles from downtown meant that it must have been located in East Atlanta, but most people had long forgotten it. One of the residents they interviewed mentioned exploring in the 1960s the ruins of the old “Scully’s Mill” located on Sugar Creek behind what is now McNair High School on Bouldercrest Drive. There were eventually three mills located on Sugar Creek and Intrenchment Creek that produced great supplies of paper for several decades. An early etching of the mill and a 1930s photo of the ruins are included in the book.
During one of the authors’ fact-gathering visits to the Atlanta History Center, an archivist commented that there was little about East Atlanta’s history there, as though the once-thriving area had never existed. They believe “Images of America: East Atlanta” will help change all that.
The book will be available for purchase at the Argosy kickoff party on March 7 at 470 Flat Shoals Avenue where there also will be refreshments. Later in March there will be a book-signing event at Bound to Be Read in the East Atlanta Village. There will also be an author talk at East Atlanta Library and other book signings at local bookstores and independent retailers.