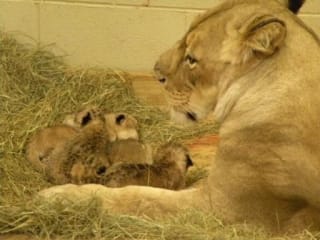 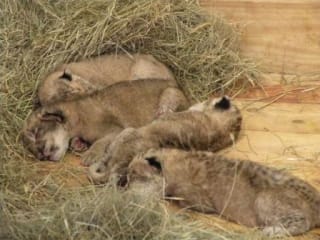 By Keisha Hines
Kiki, a 9-year-old African lioness, gave birth to four cubs on November 19. The cubs are the second litter for Kiki and 9-year-old male Kamau.
The Animal Management and Veterinary Teams confirmed Kiki’s pregnancy via ultrasound on October 28. Lion gestation averages three to four months, and litter size is usually one to five cubs.
“It’s been more than five years since we’ve seen African lion cubs at Zoo Atlanta. We couldn’t be more delighted about finishing an extraordinary year for Zoo babies on such an exciting high note,” said Raymond B. King, President and CEO. “As we approach the holiday season, we encourage all of our members and guests to bring their families to enjoy a memorable opportunity to visit and appreciate our many extraordinary animal families.”
Kiki, who has already proven to be an attentive and protective mother, will have a chance to bond with her new offspring in an off-exhibit den before the cubs accompany her into their African Plains habitat. Born blind and entirely dependent on their mothers for care and protection, lion cubs usually stay with their mothers for about 18 months.
Kiki’s new offspring aren’t expected to begin exploring their habitat until they are at least eight weeks old. Their father Kamau is on exhibit, but it will be several weeks before he is introduced to the cubs.
Kiki and Kamau have produced one previous litter. Born in 2008, males Christos, Mikalos, and Athanaisi now reside at Africam Safari in Puebla, Mexico.
Found in most countries in sub-Saharan Africa, African lions are currently classified as vulnerable. The wild population is in decline because of threats such as habitat loss, retaliatory killing by humans because of livestock predation, and reductions in available prey species.
The lion cubs are the latest in a remarkable string of high-profile Zoo babies born in 2013. They join the first rhino calf ever born in the Zoo’s 124-year history; two infant gorillas; two infant orangutans; and Mei Lun and Mei Huan, the twin giant pandas born to Lun Lun in July. The rhino calf and the four infant great apes are on exhibit now with their mothers. Lun Lun and the twins were recently given access to their dayroom habitat in The Arthur M. Blank Family Foundation Giant Panda Conservation Center.